Botanical source: Buchu consists of the dried leaves of Harosrna Barosma Betulina (Thumb.) Bartle & Wendl. and other species of the family Rutaceae. The plants are small shrubs with opposite leaves.

Geographical source: These plants grow wild and also cultivated in some African countries, particularly the Cape Province of South Africa.

The leaves are simple, 10 to 10 mm long, rhomboid-ovate in shape, bright green to yellowish green in colour; petiole very short; lamina punctate due to the presence of many scattered oil glands, surface glabrous, upper two-thirds of margin dentate but lower one-third serrate, apex blunt and recurved, base tapering and equal, venation pinnate, with branching curved veins; texture stiff and brittle when dry, but tough when moist. Trichomes are present only on the midrib and petiole. Odour strong, characteristic; taste strong and aromatic.

Leaves of Barosma betulina (Buchu) differ from those of other species of Barosma, such as Barosma crenulata, Barosma serratiflia Barosma venusta and pulchella, which are often used as good substitutes of Buchu, mainly in size and shape. Since the drug occurs in entire form, the characters of the leaf are very important for its identification. 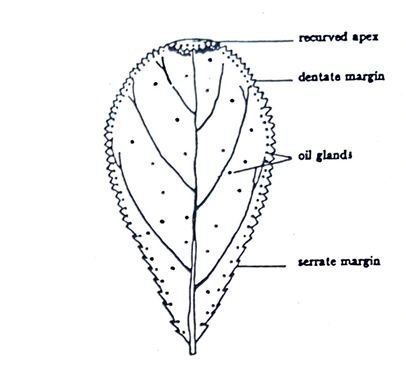 The upper epidermal cells are polygonal with straight anticlinal walls and covered with a thick cuticle. Mucilage fills the lower half of the cells, some of which also contain feathery or spherocrystals of diosmin. Stomata are absent on the upper epidermis, but numerous anomocytic stomata are present on the lower epidermis. Cluster crystals of calcium oxalate occur in some mesophyll cells. Trichomes are short unicellular, conical and 50 to 80 microns in length.

Buchu contains 1.5 to 3.8 percent of a Volatile oil, the chief constituent of which is phenolic camphor, diosphenol (up to 30%). The drug contains an active glycoside of diosmetin (diosmin), mucilage, resin, and calcium oxalate.

Buchu is used as a tonic and diuretic. It is particularly useful in intlan1matory conditions of the urinary tract.

Substitutes and adulterants of Buchu Leaf

The dried leaves of Barosma ereimJata crenulata. (Oval Buchu). B sematifolia  (Long Buchu) and some other species of Barosma and leaves of Empkurnm semulatum are used as substitutes and adulterants of Buchu.