Botanical source: Digitalis consists of the dried leaves of Digitalis purpurea Linn., which are rapidly dried at a temperature between 50 to 60°C immediately after collection. The plant is a biennial herb of the family Scrophulariaceae.

Macroscopical characters: Foxglove leaves are simple, 10-30cm long and 4-1.0 cm broad, broadly ovate to ovate-lanceolate with a rounded apex and decurrent base. The petiole is winged and varies from one fourth to equal in length to the lamina. The upper surface of the lamina is pubescent and grayish green and the lower strongly pubescent. and dark grayish green. The margin is crenate to serrate or dentate; venation is prominent on the lower surface and the side veins leave the midrib at an angle less than 45 degrees curving towards the apex. Odour of the leaves is tea-like and taste bitter. 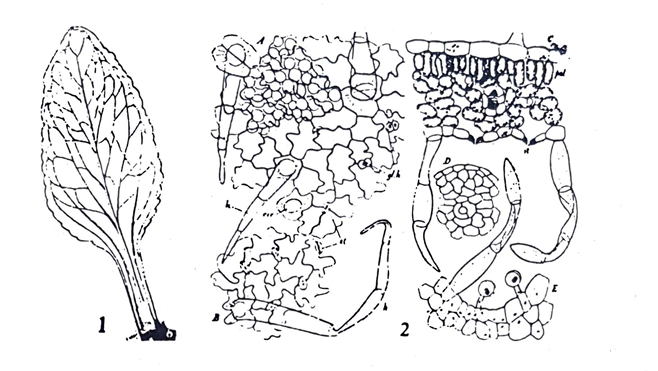 Microscopical characters: Cells of the upper epidermis have straight or slightly wavy anticlinal walls and those of the lower epidermis have strongly wavy anticlinal walls; stomata are anomocytic (ranunculaceous) type, few on the upper epidermis, but abundant on the lower. Both covering and glandular trichomes are present on both surfaces. Covering trichomes are more numerous, especially on the lower surface. They are uniseriate, 3-5 cells long, with acute apex, finely warty surface and often with collapsed cells. Glandular trichomes are much less numerous and are usually found over the midrib and large veins. They have a short unicellular stalk and a unicellular or bicellular head. Vascular bundles of the midrib are strengthened by a band of collenchyma tissue. Fibres and calcium oxalate crystals are absent.

Chemical constituents: Foxglove contains about 35 cardioactive glycosides, which include digitoxin, gitoxin, digoxin, gitaloxin and digitalin as well as the saponin digitonin. It also contains oxidase enzymes.

Uses: Digitalis and its glycosides are used as cardiotonic in the treatment of congestive heart failure. It increases the contractility and improves the tone of the cardiac muscle.