Aniseed consists of the dried, ripe fruits of Pimpinella anisum Linn., an annual plant of the family Umbelliferae.

The plant is indigenous to Greece, Turkey, and Egypt, but widely cultivated in both Europe (Spain, Bulgaria, Germany, Italy and Russia and America (Mexico, Chile). 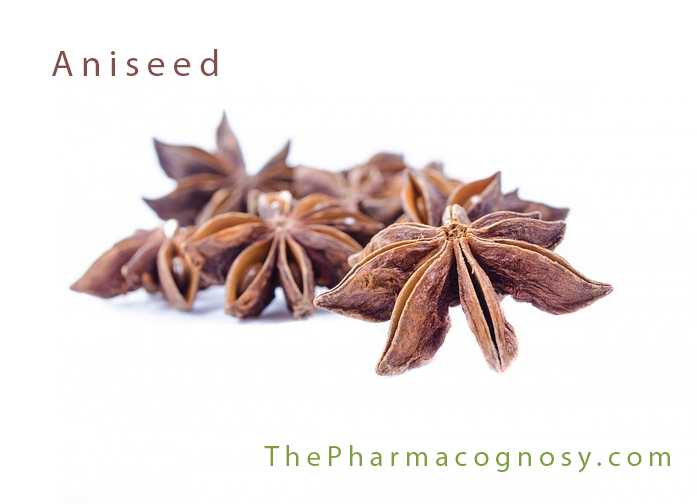 The drug occurs as entire cremocarps with the pedicels attached. Each fruit is about 3 to 6 mm long and 2 to 3 mm wide, ovoid-conical in shape and yellowish brown in colour. The surface is covered with numerous short, conical trichomes and the apex is crowned with a bifurcate stylopod. Each mericarp has five wavy ridges. They possess an aromatic odour and a sweet aromatic taste.

The epidermis of the pericarp bears numerous papillae and unicellular hairs. Each mericarp contains 15 to 45 branched vittae on the dorsal surface. A small amount of vascular tissue and reticular parenchyma is present. The endosperm is made up of parenchymatous cells containing protein and fixed oil.

Aniseed contains 2 to 3 percent of volatile oil, which contains about 90 percent of anethole, the aromatic constituent. It also contains proteins and about 8 to 11 percent of fixed oil.

Aniseed is commercially used for the production of Anise oil. Medicinally it is used as an aromatic and carminative.