Aspidium consists of the rhizome frond bases and apical buds of Dryopteris filix-mas (Linn.) Sch., which is a fern (Pteridophyte) of the family Polypodiaceae.

The whole drug is somewhat conical, cylindrical and curved in shape, 7 to 25 cm in length. The rhizome itself is 2 to 4 cm in diameter. It is dark brown externally and yellowish green internally. The rhizome is completely covered with hard, dark brown, curved frond bases and bears numerous membranous scale leaves, called ramenta. Its fracture is short; the fractured surface exhibits a yellowish green surface bearing a diffuse circle of 7 to 9 meristeles, external to which is a ring of numerous small vascular strands. The drug possesses a slight odour and an initial sweetish astringent taste, which later on becomes bitter and nauseous. 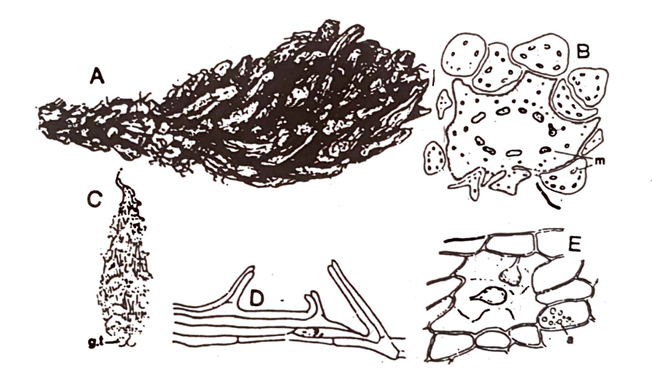 The ground tissue of both the rhizome and frond bases consists of rounded parenchymatous cells with abundant starch grains and intercellular spaces. Within some of the large intercellular spaces there occur unicellular, sub-spherical or club-shaped glands, which secrete a greenish oleoresin. The hypodermal layer consists of 2 to 3 rows of sclerenchymatous fibres. The meristeles contain one to three contain one to three concentric bundles with central xylem. The xylem vessels are scalariform. Each meristele is surrounded by an endodermis. The scale leaves are composed of thin-walled cells and have marginal teeth. At the base of each ramentum there are two small unicellular glands.

Aspidium is a strong anthelmintic drug. It is used to kill and expel intestinal worms including tapeworms.

Many other fems produce similar rhizomes, which are often used to substitute and adulterate Aspidium. The most common ones of those are the rhizomes of Athyrium filix-foemina and Dryopteris spinulosa.