Botanical source: Belladonna consists of the leaves and other aerial parts of Atropa belladonna Linn. of the family Solanaceae, collected when the plant is in flower.

Geographical source: The plant is indigenous to central and southern Europe and is cultivated in England, other European countries and the United States of America.

Microscopical characters: Leaf epidermal cells of both surfaces possess sinuous walls and striated cuticles. Stomata are present on both surfaces, but more numerous on the lower. surface, typically cruciferous (anisocytic). Both clothing and glandular trichomes are present. Clothing trichomes are simple, uniseriate; two to four cells in length. Glandular trichomes have uniseriate stalks and unicellular heads. Palisade consists of a single layer of cells. Microsphenoidal crystals of calcium oxalate occur in the mesophyll. An are of collateral vascular bundle occurs in the midrib. Steam epidermal cells are provided with striated cuticle, both covering and glandular trichomes are present on them. Other tissues of the stem include an endodermal starch sheath, reticulate vessels with bordered pits and pericyclic and xylem fibres. Microsphenoidal crystals of calcium oxalate occur in the pith. Calyx possesses a high proportion of glandular trichomes. 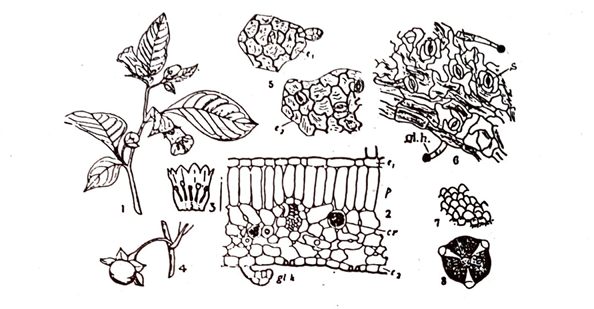 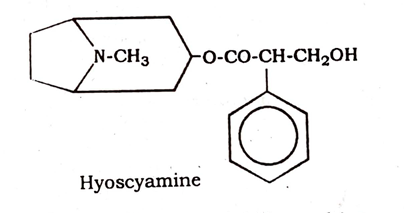 Uses: Belladonna is used externally as a painkiller and internally to check excessive secretions, as a sedative and antispasmodic. It is a mydriatic and parasympatholytic drug and also acts as a local anaesthetic and anodyne.