Botanical source: Chamomile consists of the dried, expanded double flower heads of Anthemis nobilis Linn collected from cultivated plants. The plant is a procumbent perennial herb of the family Compositae. 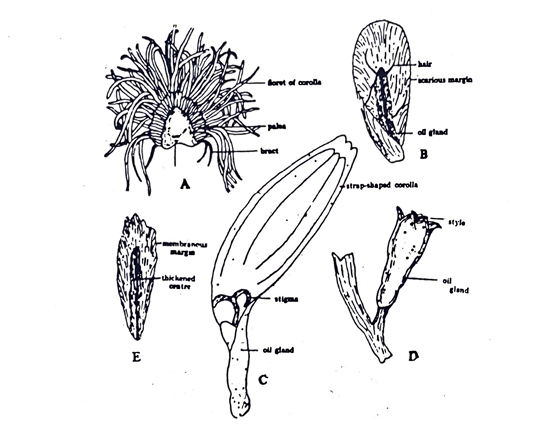 The flower heads or capitula are 1 to 2 cm in diameter, hemispherical is shape, white to pale buff in colour and possess an aromatic odour and bitter taste. Corolla of outer ligule (female) florets is strap-shaped with three teeth and four principal veins. They contract near the base to form a short tube. Numerous scattered oil glands occur on the petals. Ovary inferior with a bifid stigma. The involucre of bracts is hidden under the reflexed florets. Tubular florets (hermaphrodite) are few with five-fid corolla and scattered oil glands. Stamens five with epipetalous anthers. Ovary inferior with a bifid stigma. Numerous small yellow, glistening, glandular trichomes occur scattered over all parts of the florets and bracts.

The principal constituents of Chamomile is volatile oil (0.4 to 1.0 percent), which is blue in colour when freshly distilled owing to the presence of azulene. It also contains a dihydroxycinnamic acid and apigenin glycoside.

Chamomile possesses aromatic bitter stomachic properties and is used as a carminative for treating dyspepsia. It also possesses anti-inflammatory, anti-bacterial and anti-fungal properties. Recently it has been found to be effective against brain cancer.