A complex tissue is made up of more than one type of cell-elements, which work together as a unit. There are two types of complex tissues:

which constitute a vascular bundle, the conducting system of the plant. 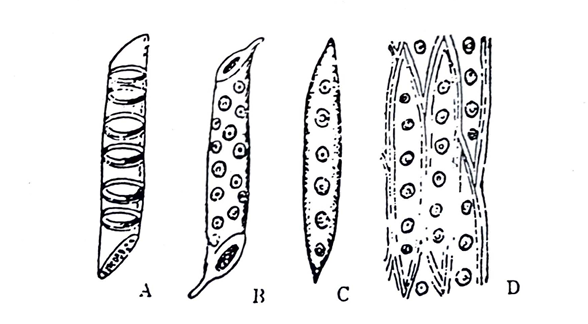 Xylem or wood is a typical complex tissue and constitutes the major portion of the vascular bundle. It is composed of the following elements:

Tracheids are elongated cylindrical cells with hard, thick and lignified walls, large lumen and tapering end. Their walls are provided with one or more rows of bordered pits. Depending on the thickening of the. walls the tracheids may be annular, spiral or scalariform with simple pits. In the wood of ferns and palms tracheids occur alone whereas in the wood of higher plants they occur associated with the vessels. Tracheids conduct water as well as give mechanical strength to the plant. 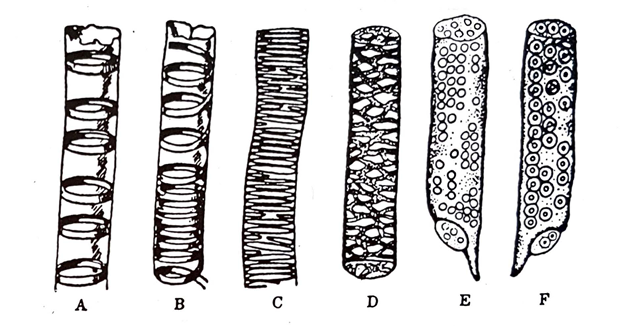 Sclerenchymatous fibrous cells associated with other xylem cells are called wood fibres. They occur abundantly in most woody plants and add to the mechanical strength of the xylem tissue.

The phloem is also a complex tissue formed along with the xylem as a part of the vascular bundles. It is composed of thin-walled cells and its main function is to conduct prepared food materials, especially sugars and proteins. It is composed of

These are slender, tube-like structures composed of elongated, thin-walled cells, placed end to end. Their transverse partition walls, perforated by a large number of pores as in sieves, are called sieve plates. Although living, the sieve tubes do not possess any nucleus, but their cytoplasm is continuous through the pores .of the sieve-plate. During winter the sieve-plate is covered on both the surfaces by a carbohydrate substance, callose, forming a pad. This pad is known as callus-pad. The callus-pad closes the perforations, and consequently, the sieve-plate ceases to function. During the next growing season, the callus-pad is dissolved and the sieve-plate resumes its function of transmission of food materials from the leaves to the storage organs and growing regions of the plant.

These are long, narrow and thin-walled cells found associated with the sieve tubes, and are connected with them through some pores. Each companion cell contains dense cytoplasm and a prominent nucleus. They occur only in the higher plants (Angiosperms) and assist the sieve tubes in the conduction of food material. 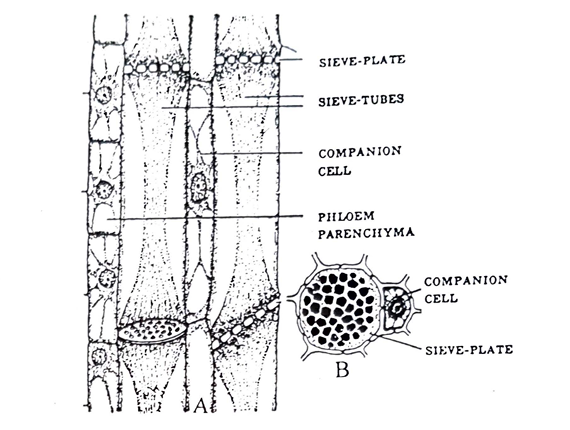 A Sieve-tubes, companion cell and phloem parenchyma in l.s.; B, a sieve tube (showing sieve-plate) and a companion cell in t.s. (Reconstructed from Dutta).

Some parenchymatous cells always occur as part of the phloem in all plants, and these constitute the phloem parenchyma. These cells are all living and active. They are vertically elongated. Their principal functions are storage of proteins and transportation of food matter transversely from the sieve tubes to the medullary rays and the xylem.

Some sclerenchymatous cells sometimes occur in the secondary phloem (bast) of some plants, e.g. the bark of Cinchona species. These cells are known as bast fibres as they assume the shape of fibres

Position of the phloem in the plant body often offers important anatomical characters in the microscopic examination of some plant drugs. Normally, in the stems of angiospermic plants the phloem lies external to the xylem. But in some families of medicinal plants, such as Solanaceae, Apocynaceae, Myrtaceae, Convolvulaceae Compositae, etc., a part of the primary phloem, called the intraxylary phloem, occurs internal to the primary xylem around the pith. Sometimes small groups of secondary phloem, called the interxylary phloem, are found embedded in the secondary xylem of some plants, such as Strychnos nux-vomica, combretum; Agave and Aloe species. In addition, as mentioned before, occurrence of bast fibres is characteristic of some drugs.