The microscope, essentially the compound microscope, which produces high magnification, is basically made by using two convex lenses of short focal length. They are arranged vertically on a common axis at certain distance from each other as shown in the diagram (Fig. 75). The first of these lenses (lower one). called the objective lens, produces the primary image (I) of the object (0) placed under it. This is an enlarge, real, inverted image of the object., This image then acts as an object for the second lens upper one), called the eye lens, which gives a still further enlarged virtual image (I) of the object. This is the image, which is seen by the eye of the obseiver. This basic principle is built up in a convenient form to construct a modem compound microscope. With technological advancement over the years, however, this basic principle has been considerably modified and improved upon to utilize the microscope properly.

Parts of a Compound Microscope

A compound microscope is made up of the following parts:

This is a vertical metallic tube, which houses the eyepiece at its upper end and the nosepiece at the lower end. It moves up and down by two adjustment knobs (coarse and fine).

This is a moveable circular metallic disc fitted at the lower end of the Draw-tube and holds the objectives.

The objective is a small metallic tube, which holds the objective lens. It screws into the Nosepiece.

The stage is a dark coloured rectangular or circular metallic support on which the object (mounted on a glass slide) is placed for examination. It is fitted below the Nosepiece and is provided With a central hole to allow light to pass through the object. It has two clips to hold the slide With the object in position.

It is an optical part ion a metallic casing which is placed under the stage and is used to illuminate the object correctly. The condenser is provided with an adjustable diaphragm, which controls the amount of illuminating light.

the object is illuminated either by a built-in light source fitted below the condenser, or by an external source of light. In the latter case, the light is reflected to the object by an adjustable plano-concave reflector mirror fitted under the condenser. 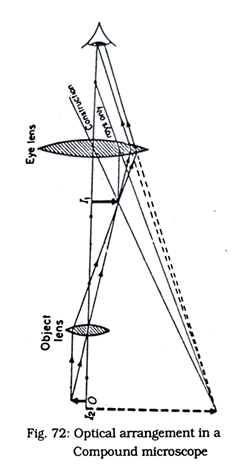 In order to carry the eyepiece, objective and condenser in strict alignment along the optical axis and to maintain the stage perpendicular to the axis, the microscope is assembled in a strong mechanical frame, called the stand. The stand is provided with a foot In order to ensure stability of the Instrument, and a limb which is hinged to the foot. The limb supports the optical units, the stage and the adjustable knobs.