Organised plant drugs comprise whole plants or herbs or any of their organs or any morphological or anatomical part derived from them, which are composed of definite organized cellular structures. Thus. organized plant drugs may be conveniently grouped according to the plant organs from which they are derived. such as I. Overground structures like Leaves and herbs; Flowers; Seeds; Fruits; Barks. and Woods; and II Subterranean structures like Roots; Rhizomes; Bulbs, and Corms.

Herbs generally refer to the non-woody plants. But for the purpose of grouping plant drugs, the term herb is used here in a broader sense to include the drugs that are derived from both entire herbaceous plants and flowering tops of large herbs, shrubs and small trees. Thus, herb drugs include leaves, slender stems, flowers and young fruits, leaves constituting the major bulk. The morphological and histological features of these parts, occurring in herb drugs. have been described under groups of drugs. Some of the pharmaceutically and commercially useful drugs belonging to this group are described in the following pages in the form of Monographs as representative examples for the students so that they can also describe other herbal drugs. 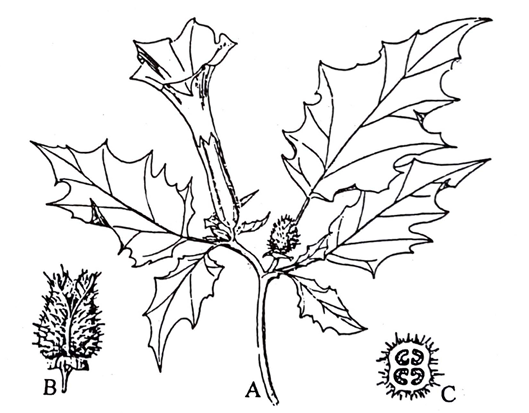 Microscopical characters: Both surfaces of the leaves are covered with a smooth cuticle and possess both stomata and trichomes. The epidermal cells have wavy anticlinal walls, particularly those of the lower epidermis. Stomata are of anisocytic (cruciferous) type. Both clothing and glandular trichomes are present. Clothing trichomes are conical, uniseriate with thin warty walls, 2 to 5 cells long, often with a large basal cell. Glandular trichomes are small with a one or two-celled stalk and a 2 to 7 celled head. Clusters of calcium oxalate are abundant in the mesophyll, rarely prisms, twined or micro sphenoidal crystals also occur immediately below each epidermis and vessels with annular and spiral thickenings occur in the midrib.

Chemical constituents: Stramonium contains 0.2 to 0.45 percent of tropane alkaloids, principal ones being hyoscyamine and hyoscine (Scopolamine). Other tropane alkaloids like atropine, littorine, tigloidine, meteloidine, tropine and pseudotropine are also present in smaller quantities.

Uses: Stramonium is a parasympatholytic and decreases the flow of secretions of saliva, milk and sweat. It is used as a mydriatic gent, as a sedative and an anodyne.