Red or Yellow Deal consists of the wood of Pinus sylvestris Linn. and that of Picea excelsa Link constitutes the White Deal. Other species of Pinus and Abies also yield similar woods. These plants belong to the family Pinaceae.

Deal plants are grown in many European countries, North America and Canada.

Deal wood is straight grained and splits readily longitudinally with smooth surfaces. It is soft in texture and buff in colour has a density of about 0.35 to 0.8 and possesses a resinous odour. Annual rings are well marked, pores absent but resin ducts occur in the central and outer part of each annual ring. The medullary rays appear as fine whitish lines.

The wood consists almost entirely of narrow long tracheids having pits on the radial walls. The pits are large, circular and bordered. Schizogenous resin ducts are abundant in the middle region of each annual ring. Thin-walled parenchymatous cells occur surrounding. the resin ducts. Both uniseriate and multiseriate medullary rays are present, which are composed of elongated rectangular or rhomboid parenchymatous cells. 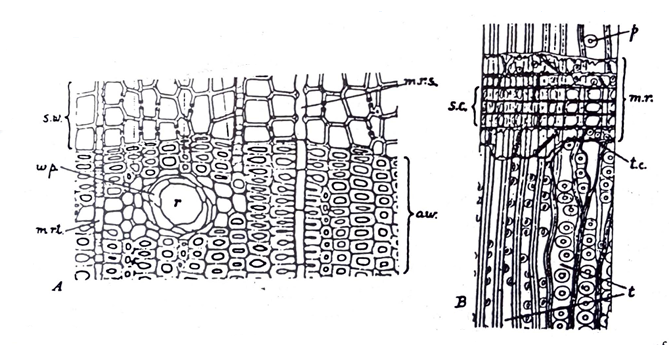 Deal contains about 57 percent of cellulose, 25 percent of lignin, about 1 percent of resin (Colophony) and a small quantity of volatile oil (Turpentine)

Deal is used as the chief source of wood cellulose and for making mechanical wood pulp.