Leaves are flattened lateral outgrowths of the stem which are generally green m colour and form the foliage of a plant. A typical leaf of two main parts: an expanded blade or lamina, and a stalk called the petiole, by which the leaf is attached to the stem. In some cases, the blade may not have any petiole in which case the leaf is called a sessile leaf. When a well-defined petiole is present, the leaf is called a petiolate leaf.

The lamina is provided with the main strand of vascular tissue, called the midrib, which runs centrally through the lamina from its apex. The whole lamina is supplied with other smaller and narrower strands of vascular tissues, known as the veins, which in turn produce branches and branchlets, called veinlets, to produce a network of veins, called the venation. The principal veins may arise as side branches from the midrib or may develop from the base of the lamina parallelly to the midrib. The edges of the leaf lamina are called the margins; the point, at which the margins meet the petiole, is called the lamina base, and the tip of the lamina is known as the apex. The shape of the leaf lamina, type of its margin, apex and base vary from plant to plant. These variations constitute important morphological characters for identification and differentiation of leaves of different plants. For example, Belladonna, Buchu, Coca, Digitalis, Stramonium and Senna, all of which are leaf drugs, can easily be distinguished from each other by using the above characters. In fact, for drugs that are composed of entire leaves, morphological characters form the main basis of their identification. These characters are described below. 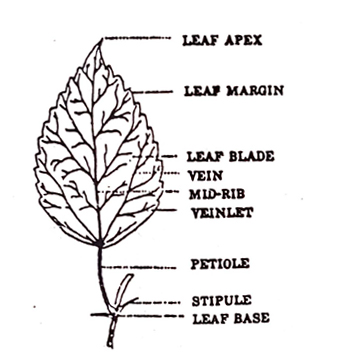 Shape of the leaf

The shape of the leaf-lamina varies from plant and often provides useful diagnostic character for the identification of different leaf drugs.

Margin of the leaf

The margin of a leaf is often characteristic and provides important diagnostic character for the identification of a leaf drug. The margin may be· A. Entire (smooth even edges); B. Serrate (toothed edges, teeth pointing towards the apex of the leaf); C. Dentate (toothed edges, teeth pointing outwards); D. Crenate (toothed edges with broad and rounded teeth); E. Repand (wavy or undulated); F. Sinuate (edges turning in and out strongly) and G. Incised edges cut in to sharp, (deep, irregular and unequal teeth). In addition to these types, the leaf margin may vary greatly under various conditions of growth. 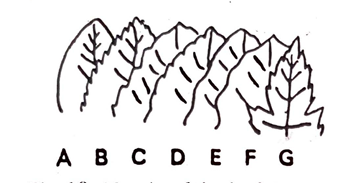 Apex of the leaf

The tips or apices of different leaves vary greatly from plant to plant.

They may be described as

Surface of the leaf

Texture of the leaf

Texture or feel of the leaf to the touch varies from leaf to leaf and is sometimes very important. in its identification. The texture may be described . as (a) Coriaceous (tough and scabrous); (b) Papery (thin and pliable): (c) Leathery (tough, thick, leather-like), and (d) Succulent (thick, soft and juicy). Other comparative terms are also used to describe the texture of a leaf.

Fig. 21: Venation of the leaf: A, reticulate, B, parallel. (Reconstructed from Bhuya & Timm).

Venation of the leaf

According to the composition of the leaf blade, which may be composed of either a single piece or several separated segments or leaflets, leaves are of two types

A simple leaf consists of a single blade with entire or incised margin, e.g., Belladonna, Stramonium and Castor leaves.

A leaf is said to be compound when it is composed of a number of separate parts of leaflets, which remain attached to a common axis or rachis. Leaflets of a compound leaf resemble the small simple leaves in structure. Leaves of Cassia species (e.g., Senna) and Tamarindus species are typical examples of this type of leaves. Both these types of leaves constitute many important crude drugs of pharmaceutical importance.

Fig. 22: Types of leaves. A, simple; B, Compound. (Reconstructed from Dutta).