Gauzes are usually absorbent dressings principally made from cotton fabrics. They can be either medicated or unmedicated. Medicated gauzes and also other medicated dressings are prepared by immersing the fabric in a solution of the medicament and drying off the solvent. Gauzes used for surgical dressings may be conveniently grouped as follows: 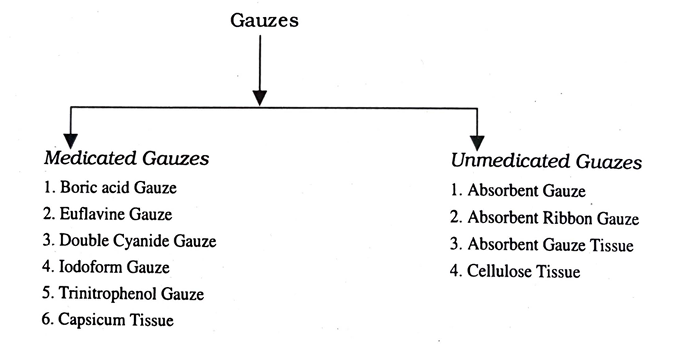 These are absorbent gauzes treated with the respective medicaments. They include the following:

This gauze contains 3 to 7 percent of Boric acid and tinted pink with a suitable dye. Eujlavine Gauze: This gauze is medicated with 0.1 percent of Euflavine.

This gauze contains a gauze of Mercury cyanide (0.5 to 1.5 percent) and Zinc cyanide (1.5 to 3.0 percent) and is tinted purple with a suitable dye.

This medicated gauze contains 4 to 6 percent of Iodoform.

This is a tubular absorbent gauze. which encloses Capsicum Cotton Wool.

This gauze consists of a plain wove cotton fabric, 36 inches wide, with not less than 19 threads per inch in the warp and 15 in the weft. One square yard of the gauze weighs not less than 11. 6 g.

This is finer than Absorbent Gauze and has not less than 30 threads per inch in the warp and 25 in the weft. A 2 in by 6 yd piece of the gauze weighs not less than 12.3 g.

This is a sleeve-like (tubular) absorbent gauze, which encloses a thick layer of absorbent cotton wool. The fabric used in this gauze has 12 threads per inch of weft. One pound of this gauze must have a superficial area of not less than 1800 sq. inch.

This is also a tubular absorbent gauze like the Gauze tissue. But it encloses a thick layer of cellulose wadding instead of absorbent cotton wool. Other specifications are similar to those of Absorbent Gauze Tissue.