Ginger consists of the dried rhizomes of cultivated Zingiber officinale Roscoe devoid of their dark outer skin. The plant is a perennial herb of the family Zingiberaceae.

The drug is a laterally compressed horizontal rhizome bearing short, obovate, oblique and somewhat flat branches, each branch exhibiting a depressed stem scar at the apex. It is 7 to 15 cm long, 3 to 6 cm wide and 0.5 to 1.5 cm thick. The surface has longitudinal striations with occasional projecting fibres and is buff or yellowish white in colour. The fracture is short and somewhat fibrous with a mealy fractured surface. The transversely cut surface shows a narrow cortex, a well-marked endodermis, a wide stele, numerous fibrovascular bundles and secretion cells. The drug has an aromatic odour and a pungent taste.

No cork tissue is present in the whole or powdered drug. The cortical t6issue consists of thin-walled parenchyma cells with intercellular spaces. It also contains oleoresin cells and fibrovascular bundles. The endodermis is composed of tangentially elongated cells with suberised walls.

Below the endodermis is a ring of vascular bundles, which consist of phloem and reticulate non-lignified vessels. The remainder of the stele area consists of thin-walled large parenchymatous cells ‘ containing oil cells and scattered vascular bundles. A large number of starch grains is present in the parenchymatous cells. The starch grains are striated and ovate to sub-rectangular in shape with a hilum on the terminal projection. The powdered drug is yellowish buff in colour. 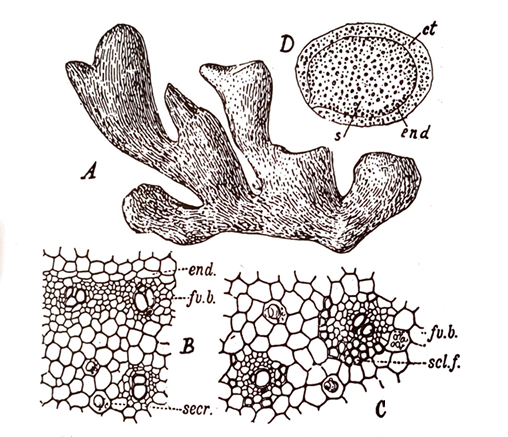 Ginger contains 5 to 8% resinous substances, the chief constituent of which is gingerol. Ginger also contains 0.25 to 3.0% volatile oil, which contains zingiberene, Citral, borneol. camphene and phellandrene. It also contains 50% starch, 2 to 3 % proteins and a small amount of sugar.

Ginger is used as a carminative and aromatic stimulant. It is also used as a condiment