Juices are natural aqueous fluids that drain out from cut surfaces of plant parts or are obtained by cutting plant parts into pieces, squeezing and straining the fluid out them. An important example of such drugs prepared from dried juices is described below in the form of a Monograph.

Aloe consists of the evaporated juice, which drains from the cut leaves of various species of Aloe (Family Liliaceae). According to their natural sources, the following three commercial varieties of Aloe are recognised.

Aloe plants are indigenously grown in various East African countries and in South Africa. They are cultivated in West Indian Islands.

Aloe occurs in hard irregular masses of variable size. The surface of Cape aloe is glassy; Curacao aloe, dull and waxy, and Socotrine aloe, dull and irregular. They also differ from each other in colour: Cape alone has a dark brown or greenish-brown colour; Curacao aloe, a reddish-brown colour, and Socotrine aloe, a dark brown colour. Aloe breaks with a brittle fracture. The fractured surfaces and pieces are characteristic of the three 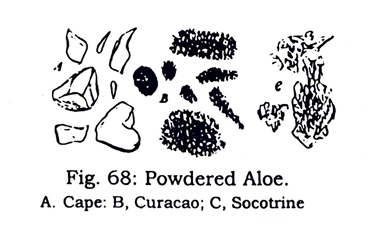 The principal constituents of Aloe are anthraquinone glycosides, the most important of which is barbaloin. The others include iso-barbaloin, Beta-barbaloin and aloe-emodin. Aloe also contains a pale yellow volatile oil and resin. 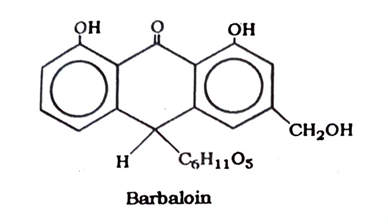 Aloe is used as a cathartic drug. It is a valuable purgative in different forms of constipation, particularly the habitual constipation. Aloe is also used as a pharmaceutic necessity in Compound Benzoin Tincture.