Nutmegs consist of the dried kernels of the seeds of Myristica fragrans Van Houtten, an evergreen tree of the family Myristicaceae.

The plant is indigenous to Molucca Islands. It is now widely cultivated m Indonesia, Malaysia, Sri Lanka and the West Indies.

Nutmegs are broadly ovoid, 2 to 3 cm long and J . 5 to 3 cm broad. The outer surface is grayish brown in colour and reticulately marked with small furrows. The endosperm, which forms the bulk of the Nutmeg, is grayish brown in colour but its outer tissue forming the perisperm is dark brown. The perisperm penetrates the endosperm and forms in-folding dark brown branches inside it giving rise to a marbled (mottled) appearance, a diagnostic feature of the Nutmegs. At one end of the kernel is a small circular depression marking the ros1t1on of the radicle. A groove extends from this depression marking the position of the kernel marking the raphe. The embryo lies in a small groove in the endosperm. The presence of oil is easily detected when the cut surface of the kernel is pressed by fingers. It has a strong aromatic odour and a bitterish aromatic taste.

The peripheral perisperm cells are polyhedral and much flattened and contain a brown content. some of them also contain prisms of a crystalline substance. The blunt-ended brown ruminations of the perisperm contain vascular bundles. The inner perisperm consists of thin-walled parenchymatous cells containing abundant fat, aleurone grains and starch grams. Some of the cells also contain tannin and starch. 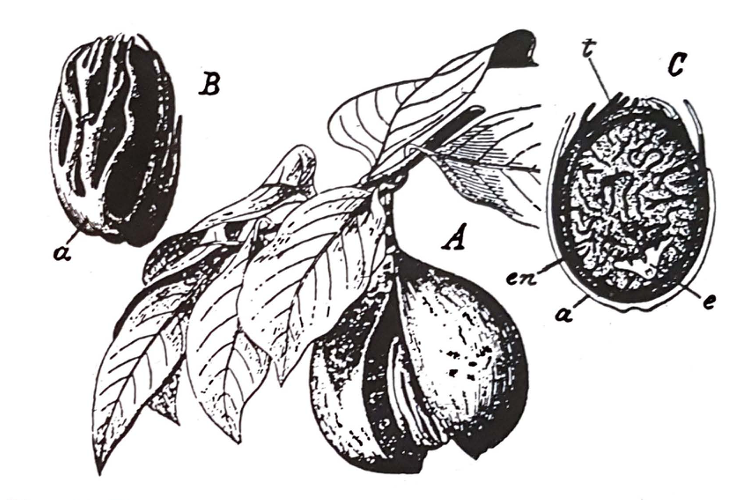 Nutmeg and its oil are used as stimulants, flavouring agents and carminatives. The expressed fatty oil and the volatile oil have been used externally in chronic rheumatism.