Peppermint consists of the dried aerial parts of Mentha Piperita Linn., a herbaceous perennial with a creeping rhizome. It belongs to the family Labiatae.

The plant grows wild in most parts of North Africa, central and southern Europe, India, Bangladesh, and is cultivated in Britain, France, and Germany.

The aerial stems are square and smooth; leaves are ovate, 3 to 8 cm long and twice as broad, margin serrate, apex acute, nearly glabrous, short-petioled and opposite decussate in arrangement. The inflorescence is in ovoid cylindrical terminal heads. Flowers small, calyx 4 or 5 cleft, corolla campa·nulate, 4 or 5 lobed. Fruit, 4 nutlets. The drug possesses a h3 aromatic odour and a pungent, cooling taste. 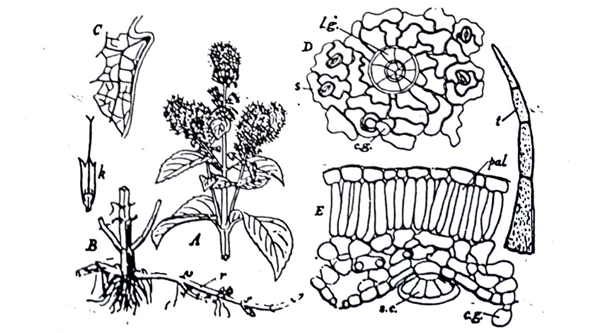 Leaf dorsiventral with one layer of palisade cells and 3 to 4 layers of spongy parenchyma. Epidermal cells on both surfaces have wavy anticlinal walls. Stomata are present on both surfaces, but more numerous on the under surfaces. but more numerous on the under surface. Both covering and glandular trichomes are present. Covering trichomes occur mainly on the margin and veins. They are uniseriate, 3 to 4 cells long and tapering to a pointed apex. Glandular trichomes are of two types. The larger typically Labiataeous ones arc sunk in depressions and each consists of a unicellular stalk and a glandular head composed of eight radiating cells forming a shallow cup covered with a cuticle. The other smaller glandular trichomes consist of unicellular stalks and unicellular heads. The shape and venation of the marginal teeth are characteristic of the leaf (see Fig. 15). 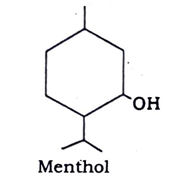 The principal constituent of Peppermint is 0.7 to 1.5 percent of volatile oil, which contains -up to 85 percent of menthol. It also contains 6 to 12 percent of tannin.

Peppermint is used mainly to prepare Peppermint oil, which is easily extracted from the drug, by using the steam distillation process. Both the drug and the volatile oil are used as carminatives and aromatic stimulants. The fresh leaves are used in pickles and salads for their stimulating flavour.

Leaves and flowering tops of other Mentha species are used as substitutes and adulterants of Peppermint.