Plants have been serving as sources of drugs and pharmaceuticals for man and other animals since time immemorial. There are about half a million of plants now growing on earth. Many of these plants possess therapeutic and pharmaceutical properties. According to a recent survey by the United Nations Commission for Trade and Development (UNCTAD), more than 33 percent of modem drugs and medicinal products are derived from plants. The medicinal and pharmaceutical properties of these plants are due to the chemical substances they produce and store. The living plant, which may be regarded as a biosynthetic laboratory, produces or synthesis a large variety of such chemical substances during its normal metabolic activities. These include compounds that are utilized as food by man and other animals and also other compounds that exert physiological effects on them. This second group of the chemical substances, often referred to as secondary metabolites, gives plants their therapeutic and pharmaceutical properties.

Chemistry and Uses of Plant Constituents

As mentioned before, plants synthesise a large variety of chemical substances, some of which are used by he plants and others are stored as by-products of metabolism or secondary metabolites. These secondary metabolites have no apparent use to the plants. But many of these secondary metabolites have prominent effects on animal systems and some of them possess important therapeutic properties. This large variety of plant constituents differs from each other in their chemical nature, properties and uses. The chemical nature, properties, sources and uses of some of the pharmaceutically important plant constituents are briefly described below.

Carbohydrates are, as the name implies, the hydrates of carbon. They are polyhydroxy aldehyde or ketone alcohols containing carbon. hydrogen and oxygen. the last two elements being usually present in the same proportions as in water. They occur most abundantly in the plants both as transitory and stored constituents.

Carbohydrates occur in simple, compound and complex forms. The simple carbohydrates are represented by the sugars like glucose, fructose maltose and sucrose. Depending on the number of carbon atoms present, they are also called (i) Monosaccharides (sugars containing 3 to 9 carbon atoms, 5 and 6 being most common) and (ii) Oligosaccharides (sugars containing 2 to 4 monosaccharide units per molecule). The simple carbohydrates (sugars) are generally water soluble and sweet in taste. Drugs containing sugars include Liquorice, which contains free glucose and fructose and Gentian, which contains sugars like gentianose (a trisaccharide) and gentiobiose (a disaccharide). 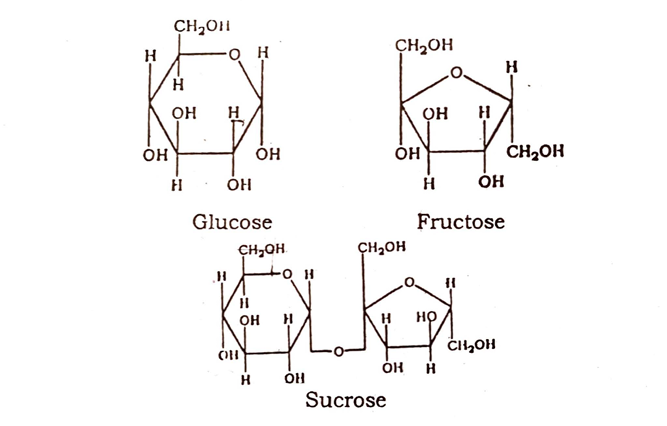 The polysaccharides also include gums, mucilages and pectic substances, which are often called polysaccharide complexes as they yield on hydrolysis not only monosaccharides but also their sulphate esters, uronic acid or amino sugars. Gums are natural hydrocolloids usually produced by plants as a protective after injury. They are translucent, amorphous substances, which swell and dissolve in water and are precipitated by alcohol and lead subacetate solution. Gums contain large proportion of sugars and also Ca, Mg and K-salts of complex organic acids. The important pharmaceutical gums include Acacia, Tragacanth and Sterculia. Mucilages are generally sulphuric acid esters of polysaccharides. They occur naturally in some plants as a slimy fluid which fluid, which is secreted within the cells. Mucilages do not dissolve in water but form slimy masses. The important mucilages of pharmaceutical interest include Agar and Alginates.