The cytoplasm is a translucent mass of complex colloidal substances and is composed of water, protein, carbohydrate, lipoids and various inorganic compounds. It occupies a major part of. the cell and remains separated from the cell wall by a semi-permeable membrane, called cytoplasmic membrane or plasma membrane or plasmalemma. This membrane acts as a barrier preventing loss of sugars and soluble proteins, and allowing water and salts to enter. The cytoplasm consists of two parts: an outer rigid and dense ectoplasm, which is free of granules, and an inner more translucent fluidy endoplasm, in which various organelles and ergastic substances (starch, protein, fat, oil, calcium oxalate crystals, etc) are embedded. 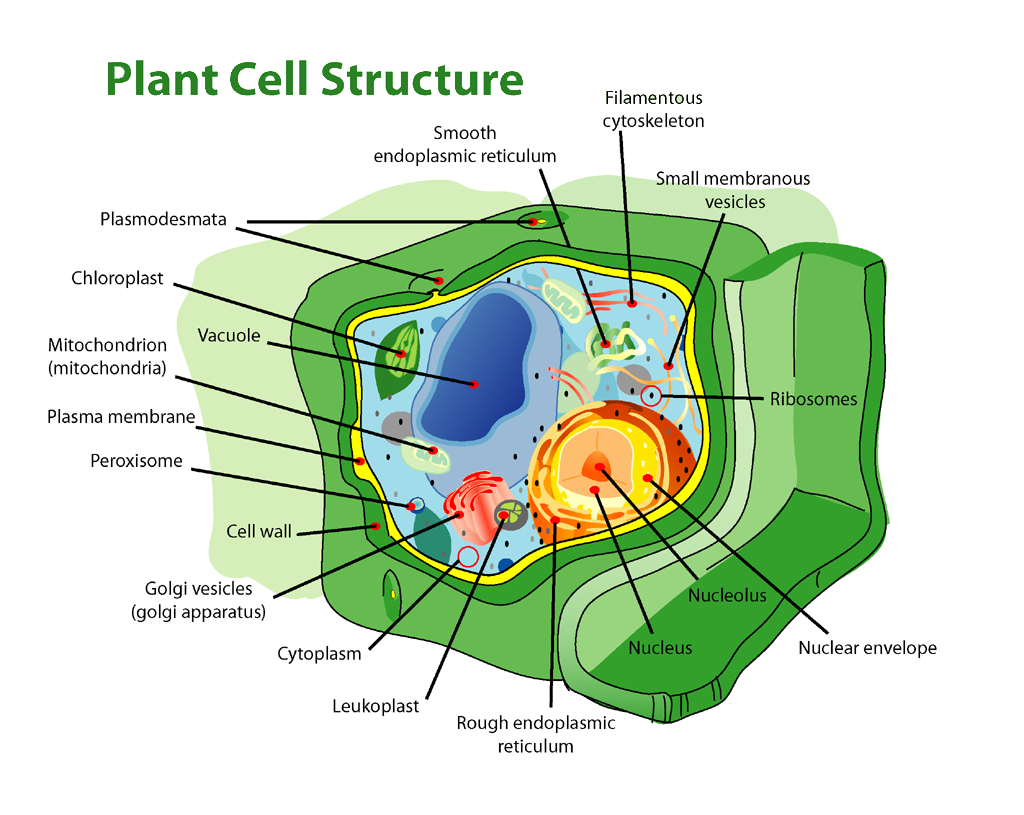 The following structures and organelles are embedded in the cytoplasm:

This is a spherical structure, which occupies a considerable part of the cytoplasm and controls the development and function of the cell. The nucleus is bounded by a porous double membrane, the nuclear envelope, and is filled with a liquid, called nuclear sap, within which are present one or more nucleolus, nuclear ribosomes and the chromatin material. Nucleolus is the site of nuclear RNA (Ribonucleic acid) and protein synthesis. Nuclear ribosomes synthesise nuclear protein. Chromatin is the genetic material made up of DNA (Deoxyribonucleic acid).

It is an elaborate network of cylindrical or ribbon-like double-membraned structures composed of lipoproteins. The endoplasmic reticulum is continuous with the nuclear envelope and extends through the cytoplasm to the outer region of the cell and passes across the cell wall as plasmodesma (pl. plasmodesmata) into the neighbouring cells. In this way, it connects the nucleus and cytoplasm of one cell to those of the next one. Thus all the cells of a living organism become interconnected. Endoplasmic recticulum occurs in two forms: the smooth endoplasmic reticulum, which has a smooth outer surface and the rough endoplasmic reticulum, outer surface of which is rough due to the presence of bonded ribosomes.

Ribosomes are small, more or less spherical organelles consisting of RNA and protein. They occur both free in the nuclear sap and in the cytoplasm and also attached to the rough endoplasmic reticulum. They constitute the site for protein synthesis in the cell. Ribosomes occurring in clusters or chains are called polysomes or polyribosomes.

A scientist named Golgi first discovered the presence of Golgi apparatus in a cell in 1898. It consists of a series of dictyosomes, formed from a number of stacked double-membraned structures. They produce a secretion of carbohydrate substance that gives rise to the cell plate of a new cell.

They are small, spherical and rod-like structures bounded by a double-membraned covering. The inner wall of the covering forms tubular projections, called cristae, into the cavity of the mitochondrion. Mitochondria, also called the powder house of the cell, arc actively concerned with the cell respiration, i.e., energy conversion in the cell, and stores various enzymes required for normal metabolism.

Plastids arc small living bodies, usually spherical or elliptical in shape. Their average size is 4 to 6 pm. There are three groups of plastids:

(1) Chloroplasts, which are green-colored plastids found in the green parts of plants. They contain a green pigment called chlorophyll, is actually a mixture of four different pigments, viz., chlorophyll a (blue-black), chlorophyll b (green-black), carotene (orange-red) and xanthophylls (yellow). Chlorophyll is essential to the plants for manufacturing carbohydrate food by the process of photosynthesis.

(2) chromoplasts, which are variously colored plastids, found in the colored parts of plants. They contain yellow-orange and red pigments, which occur mostly in the petals of flowers and in fruits. These pigments are often associated with carotene and xanthophylls and produce various shades of colors.

(3) Leucoplasts, which are colorless plastids, found mostly in the storage cells of roots and underground stems. The larger leucoplasts, called the amyloplasts, synthesise starch for storage in the absence of sunlight, and the smaller elaioplasts synthesise fats and oil for storage.

These are small, single or double-membraned storage organelles containing digestive or hydrolytic enzymes. Their actual function in the cell is not well known.

The vacuole is a highly transparent area within the cell. It is filled with a thin watery fluid called cell sap in which are dissolved salts, sugars, pigments and most of the secondary metabolites of pharmaceutical significance. Various ergastic substances (waste products), such as calcium oxalate, silica, mineral salts, and food products like reserve proteins, starch and hesperidin are also present in the vacuole. It is surrounded by a double membrane vacuolar covering, called the tonoplast which is a semi-permeable membrane composed of lipoprotein. It separates the cytoplasm from the cell sap and prevents mixing of the contents of the vacuole with those of the cytoplasm.