This tissue is composed of some special structures called glands, which contain some secretory or excretory products, Glands may consist of single isolated cells or small groups of cells with or without a central cavity. They may occur as external glands on the epidermis or as internal glands embedded in other tissues of the plant body. Cells of these glands are parenchymatous and contain abundant protoplasm with large nuclei.

Internal glands are of the following types:

Glands are of pharmacognostical significance in the examination and identification of certain crude drugs. Types and structure of the glands as well as their distribution on the plant organs often are characteristic of many crude drugs and help in their identification and detection of adulterants in them.

This tissue consists of thin-walled, elongated and much-branched cells or ducts which contain a milky or colourless juice known as latex. The cells of this tissue contain a thin layer of protoplasm lining the cell wall and numerous nuclei. Laticiferous tissue is irregularly distributed in the mass of parenchymatous cells of the various plant organs. They are of two kinds: 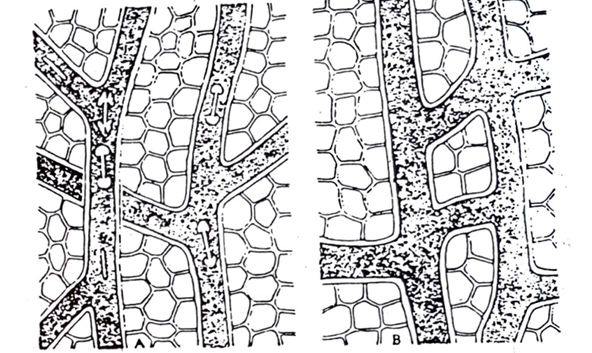 They are formed from rows of elongated meristematic cells by the dissolution of their transverse partition walls. Many such vessels develop almost parallel to each other and extend sideways forming branches in the same way. In the mature portions of the plant these independent vessels join with each other by the fusion if their branches forming a network. Latex vessels are characteristic of the Opium poppy plant (Papaver somniferum) the latex present in the latex vessels of its capsule produce the famous narcotic analgesic drug Opium.

Latex cells are also elongated and much-branched cells, which look apparently similar to the latex vessels. But they are single independent cells, which originate as minute structures and then elongate c. and branch with the growth and development of the plant, but their branches do not fuse together (as in case of the vessels) to form a network. Latex cells are found in the leaves and stems of Calotropis species, Catharanthus roseus, Euphorbia species, Thevatia species and young fruits of Carica papaya and those of many other plants.

All these varied tissues aggregate together and get arranged in some form or the other to constitute a number of tissue systems which form the structures of various plant organs. Thus, a tissue system may be defined as a collection of tissues, either of the same or of different types, which have the same origin, and which perform a common or similar function. Based on the type of function and position, plant tissues are grouped into three systems, such as