Podophyllum consists of the dried rhizome of Podophyllum peltatum Linn., a low growing woodland plant of the family Berberidaceae.

The drug is obtained from plants growing in Eastern U.S.A., and Eastern Canada.

The drug occurs in 5 to 20 cm long pieces. It is cylindrical or sub-cylindrical in shape with enlargements at intervals of 5 to 10 cm, the cylindrical part being about 5 mm in diameter and the enlargements up to 15 mm thick. The surface is smooth or with slight longitudinal wrinkles and occasional scale leaves, scars of roots and aerial shoots occur on the surface. It has a reddish brown colour. Its fracture is short with a horny and starchy fractured surface. The transversely cut surface shows a large cortex and a ring of numerous vascular bundles, each of which contains phloem in the shape of a cap on the xylem. It has as a slight characteristic odour and a bitter acrid taste. 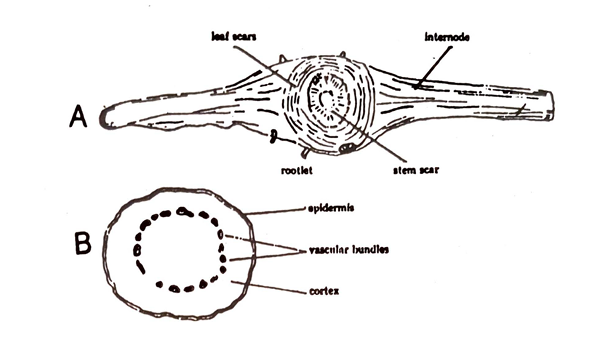 The epidermal cells are somewhat elongated rectangular in shape with a reddish brown content. The ground tissue consists of thin-walled parenchyma with a small amount of collenchyma in the outer cortex. Most cells contain abundant starch grains and a few contain cluster crystals of calcium oxalate. Small groups of pericyclic fibres occur outside the vascular bundles. The vascular bundles are small and collateral. They are separated by a number of medullary rays. Some narrow stone cells occur in the pith.

The chief chemical constituent of Podophyllum is a crystalline substance, called podophyllotoxin, and a resin, podo-phylloresin (podophyllin). It also contains quercetin and a large amount of starch. 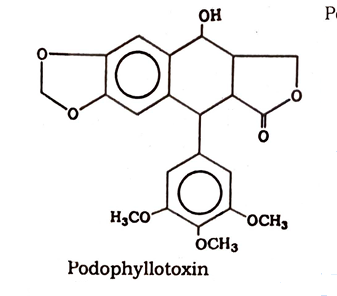