Botanical source: Pyrethrum Flower consists of the dried flower-heads of Chrysanthemum cinerariaefolium Vis., an annual herb of the family Compositae.

Geographical source: The Pyrethrum flower plant is indigenous to the Balkans. The plant is widely cultivated throughout the world, the principal sources being Kenya, Japan, Yugoslavia, East Central Africa, Brazil, and India. 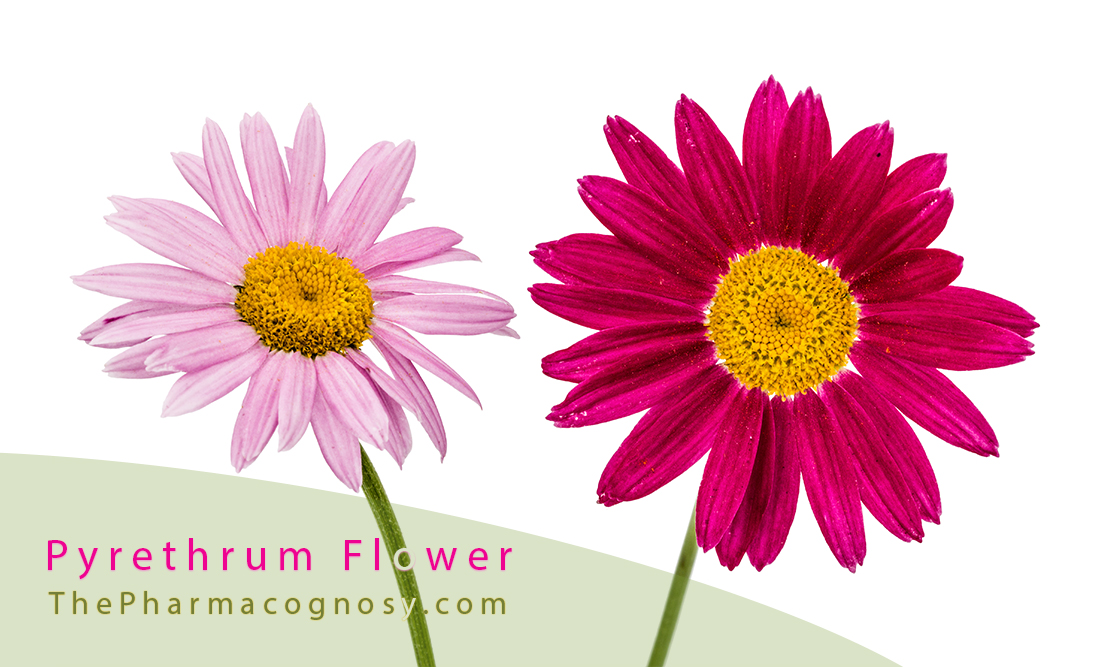 Pyrethrum flowers of commerce include flowers of all ages and are brownish yellow in colour. The closed flowers are about 6 to 9 mm in diameter, while the open ones are 9 to 12 mm. The receptacle is flat with a slight convexity in the center, 4 to 8 mm in diameter and is surrounded by an involucre of 2 to 3 rows of bracts, which are hairy and lanceolate in shape. Ray florets occur in a single row of 15 to 20; calyx tubular, membranous; strap of corolla white with 3 rounded apical teeth, they have about 17 veins, of which 5 or 6 are strongly developed; ovary inferior, 5-ribbed .with filiform style and bifid stigma. Disc florets are about 200 to 300 in number, corolla yellow, tubular stamens 5, epipetalous. Odour aromatic and taste bitter, acrid.

The active principle of the flowers is present in the secretion contained in the ducts of the ovary wall and in the glandular trichomes. The ducts are numerous in the pericarp and the glandular trichomes are most numerous in the panels of the ovaries. Similar trichomes also occur scattered sparsely over the other floral parts. The pollen grains are spherical, 34 to 40 µm in diameter, the exine is marked by radiating lines of fine warts and by numerous spines.

Uses: Finely powdered Pyrethrum Flower is used as an insecticide. It is a strong contact poison for insects.

Substitutes and Adulterants of Pyrethrum

Flowers of other Chrysanthemum species like Chrysanthemum leucanthemum and Chrysanthemum coccineum have been used as substitutes and adulterants of Pyrethrum Flower. The insect powder produced from Pyrethrum flower is often adulterated with powders of leaves and stems of the plant, some inorganic matters and some synthetic chemical substances.