Rhubarb consists of the dried peeled rhizome of various Rheum species, particularly Rheum palmatum Linn. and Rheum Officinale Baillon, but not of Rheum rhaponticum Linn. These plants belong to the family Polygonaceae.

The principal geographical sources of Rhubarb are China and Tibet where the plants grow abundantly. 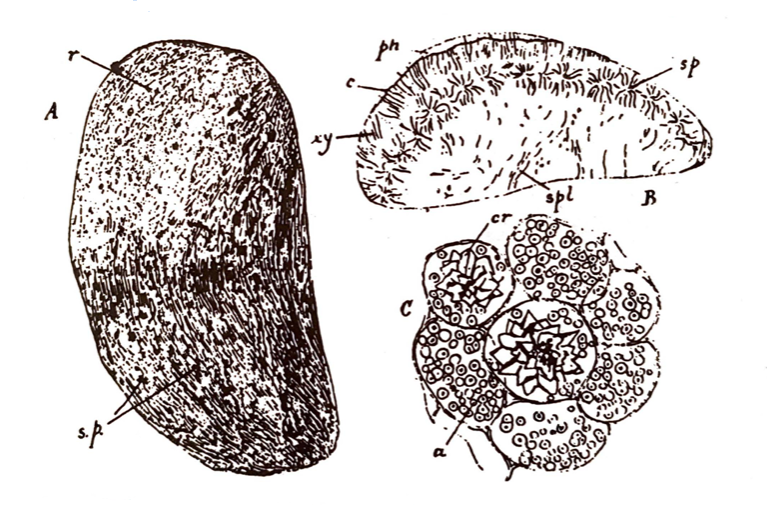 The rhizome is sub-cylindrical, barrel-shaped, conical or plano-convex in shape, 3 to 12 cm long and 3 to 8 cm 1n diameter. The drug often occurs in pieces, described as ‘flats’ or ’rounds’. The surface shows a network of reddish brown lines embedded in a whitish matrix and numerous ‘star-spots’. It is generally orange brown in colour and has an uneven granular fracture. The transversely cut surface exhibits a prominent cambium line near the periphery, a ring of star spots and a radiate structure. The drug has a characteristic aromatic odour and a bitter, slightly astringent and gritty taste.

Cork and cortical cells are absent. The phloem tissue, which consists of abundant phloem parenchyma and mostly obliterated sieve tubes, is traversed by 3 to 5 cells wide medullary rays. The medullary ray cells are filled with a reddish brown substance. The phloem parenchyma contains both simple and compound starch grains with well-marked hila. Xylem tissue occurs as a narrow ring within the cambium and is composed of numerous reticulate, non-lignified groups of vessels and single vessels. Adjacent to the inner margin of the xylem is a circle of abnormal vascular bundles (the star spots), which have a phloem in the centre and xylem on the outside of the cambium. The pith is well developed and is traversed by stellate bundles of medullary rays filled with a reddish brown substance. The pith -cells contain starch grains and very large clusters and rosettes of calcium oxalate crystals. 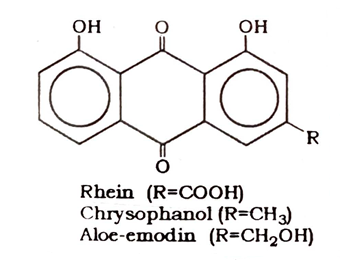 Rhubarb is used as a laxative drug. In larger doses it causes purgation. In smaller doses it is a bitter stomachic and intestinal astringent. It is also given in cases of indigestion with diarrhoea.