Squill consists of the sliced and dried fleshy scale leaves of the bulb of Urginea maritima (Linn.) Baker (=Urginea scilla Stein.) of the monocotyledonous family Liliaceae.

Squill is largely obtained from Malta and the countries of the Mediterranean coast. 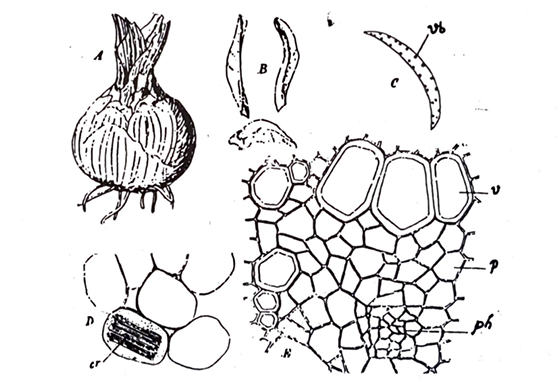 The dried slices of the bulb scales occur in concavoconvex curved strips, frequently tapering at both ends, l to 5 cm long. They are slightly translucent and pale yellow in colour with longitudinal furrows. The dried pieces are brittle and have a short fracture. But they are tough and flexible when mist. The fractured surface is mucilaginous. The transversely cut surface shows a number of scattered vascular bundles. The drug has a slight odour and possesses a bitter mucilaginous and acrid taste. Occasionally the entire fresh bulb is sold in the market. The entire bulb is ovoid in shape, 18 to 20 cm high and 12 to 15 cm in diameter. It is often crowned with the basis of the aerial leaves at the upper end and bases of the adventitious roots at the lower end. The dry thin scale leaves of the bulb are removed during cleaning of the drug.

The epidermal cells are axially elongated and quadrangular or polygonal in shape. Nearly circular stomata are present on the lower (outer) surface of the scale leaves in very small number. They also occur very rarely on the upper (inner) surface. The bulk of the mesophyll tissue is made up of parenchymatous cells, some of which are occasionally filled with raphides of calcium oxalate embedded in mucilage. Vascular bundles are also present in the mesophyll. They are composed of spiral vessels and phloem with parenchyma in between. Rarely rounded starch grains and prisms of calcium oxalate occur in the mesophyll tissue.

Chemical constituents: Squill contains a number of cardiac glycosides, which include scillaren A (a pure crystalline substance) and scillaren B (an amorphous mixture of glycosides). It also contains flavonoids, sinistrin, mucilage (4 to 11 percent) and calcium oxalate.

Squill is a heart muscle stimulant and a powerful expectorant. It is used to improve the tone of the heart muscle of weak hearts and in the treatment of chronic bronchitis and coughs.

The fleshy scale leaves of Urginea indica, the Indian Squill, is a good substitute of the European or official Squill.