Cell contents or cell inclusions refer to those substances, which are present in the cell but do not constitute any of its parts or take any part in its functions. They occur mainly in the cell vacuole although many of them are found distributed in the cytoplasm. The cell contents represent either food storage products or by-products of metabolism, which can be roughly divided into two main groups:

A number of different types of food reserves and waste products are found in the cell sap both as solid entities and in solution. They are summarised below in a tabular form for easy recognition. 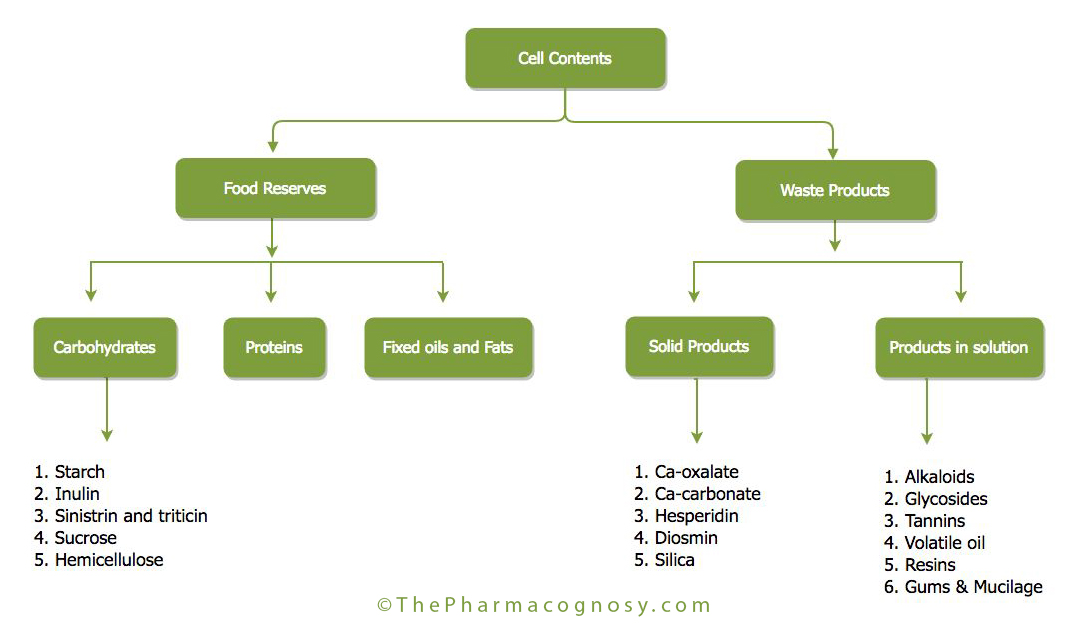 The food reserves or food substances present in cells are of three categories:

They are briefly described below.

Starch: Starch is the most common and widely distributed carbohydrate food reserve, which occurs in the form of grains or granules in the cells of most plant parts. Starch grains are often accumulated. in large quantities in some underground plant organs such as potato tubers, cassava roots, yams and ginger rhizomes. Cereal grains like maize, wheat, millet and rice are full of starch grains, which constitute from 50 to 65 percent of their dry weight. Starch grains of different plants vary in size and shape and are characteristic of their sources. The size, shape and structure of the starch grains from any particular plant vary only within definite limits. Thus it is possible to distinguish between the starches derived from different sources.

Starch grains may be spherical, oval or polygonal in shape and occur as single grains, called simple grains or in groups of 2, 3 or more. When occur in groups, they are called compound grains and designated as 2-, 3-, 4-or 5-compound, according to the number of grains forming the group. 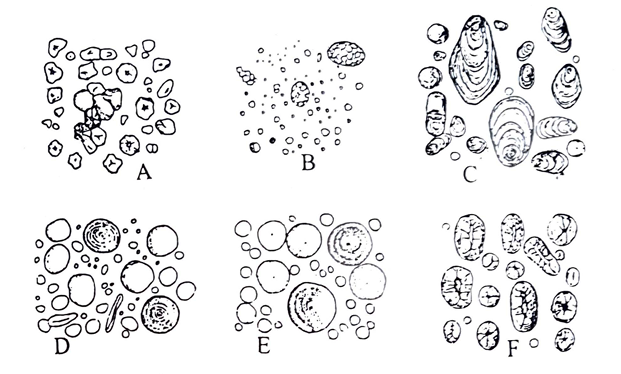 Starch grains possess definite morphological characters, which are evident under the microscope as a hilum and striations. The hilum, which is not always distinguishable, is the part of the grain formed in the plastid. It appears as a point or slit or cleft in the central part or towards one end of the grain and is the starting point of formation of the grain. The striations are eccentric or concentric rings, surrounding the hilum, formed by the deposition of successive layers of starch material as shell-like envelopes.

Chemically, starch consists of two closely related glucose polymers, which are known as amylase and amylopectin respectively. Amylase is composed of 250-300 glucose units linked by their 1 and 4 carbon atoms in a straight chain. Amylopectin is also composed of 1:4 Carbon-linked glucose units but additionally at every 25th unit they are linked by their 1 and 6 carbon atoms forming branching points. Thus the amylopectin molecule assumes a somewhat zigzag shape instead of a straight chain. Amylase is soluble in water while amylopectin is insoluble.

This differential solubility of the components of the starch grains causes them to gelatinize when heated with water.

Starch grains constitute an important diagnostic character in the examination of powdered vegetable drugs. They are most abundant in drugs of underground structures and some seeds. Only occasional grains occur in most bark and wood drugs and they are rarely in leaf and flower drugs. Their shape and size also are characteristic of drugs of different origin. When treated with Iodine solution starch grains stain blue or blue-black.

Inulin, sinistrin, and triticin: Inulin is a polysaccharide food reserve. It consists of long chains of fructose units. Inulin occurs either in solution in the cell sap or as amorphous or sphaero-crystalline masses. Some plants of the family Compositae and Campanulaceae contain inulin.

Sinistrin and triticin are closely related polysaccharides found in Urginea and Agropyrum species respectively. Inulin is sparingly soluble in cold water but readily dissolves in water at 70°C with gclatinisation.

Fig. 3: A, inulin crystals in the tuberous root of Dahlia; B. aleurone grains in the endosperm cells of Castor seed. (Reconstructed from Dutta)

Sucrose: Sucrose occurs in high concentration in the cell sap of some plants, e.g., Sugar cane and Sugar beet. It is a disaccharide forrned from glucose and fructose molecules.

Sucrose gives a red precipitate when treated witth Fehling’s solutions after hydrolysis with dilute acids. It gives a deep red colour when a few crystals of resorcin are added to a warm solution of sucrose in concentrated hydrochloric acid.

Proteins constitute food reserves of seeds and fruits. Storage protein occurs in the form of aleurone grains and also as amorphous masses. The aleurone grain consists of a mass of protein surrounded by a thin membrane. Often the protein mass encloses one or more rounded bodies or globoids and an angular body, called the crystalloid.

Aleurone grains occur commonly in oilseeds, e.g., Castor seed and Linseed. For examining aleurone grains in them the seeds should be treated with the following reagents after defatting.

Fixed oils (liquid) and fats (solid or semi-solid) are glycerol esters of fatty acids. They commonly occur with proteins as food reserves of oil seeds and fruits. Fixed oils occur as small highly refractive drops or droplets or globules and reserve fats occur in solid, coloured or crystalline masses. Feathery crystalline mass of fats occurs in the endosperm cells of Nutmeg. Oil globules associated with aleurone grains are common in Linseed, Castor seed and Nux-vornica seed.

Oils and fats are soluble in ether-alcohol. They are coloured red-brown or black with 1 % solution of osmic acid, and red with Tincture of alkanna and Sudan IV or Sudan red test reagents.

Many waste products of metabolism occur as. cell contents in a number of plant drugs. These include: 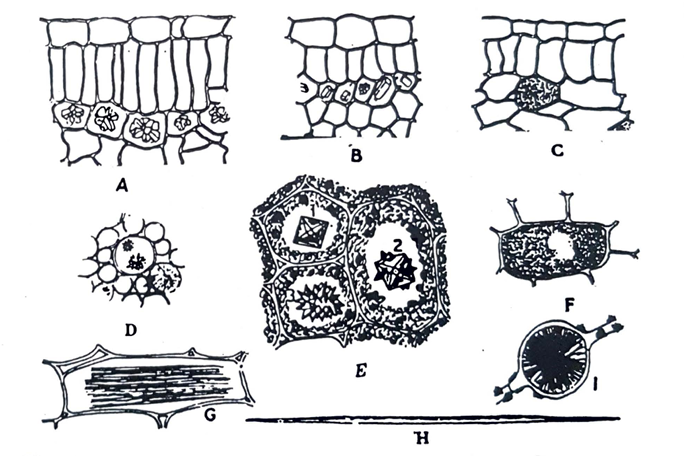 Calcium oxalate crystals are of considerable diagnostic importance in the examination of plant drugs. Prisms of calcium oxalate occur in Senna, Liquorice, Cascara, Rauwolfia, Hyoscyamus, Quassia; rosettes in Stramonium, Senna, Rhubarb, Clove, Jalap; raphides (bundles of needles) in Coco-yam, Squill; single acicular crystals in Cinnamon, Gentian, Ipecacuanha, and microsphenoidal or sandy crystals in Belladonna. In certain instances calcium oxalate crystals are also useful in distinguishing between the drugs of the same family. Typical examples are found in Solanaceous leaf drugs: belladonna contains sandy crystals. Stramonium contains rosettes and Hyoscyamus has single and twined prisms. They are also useful in the detection of adulterants. For example, presence of Phytolacca leaves in Belladonna samples can be detected by the acicular crystals of the former.

Fig. 5: Cystoliths of Calcium carbonate. A, in epidermal cells of Urtica dioica; B, in papillose epidermal cell of Cannabis leaf; C, in covering trichome of floral bract of Cannabis. (Reconstructed from Trease & Evans).

Although hesperidin and diosmin are not of common occurrence in plant drugs, their diagnostic importance in the identification of, and detection of adulterants in certain crude drugs cannot be overlooked. In fact, they have been serving as characteristic features of some important plant drugs.

Silica: Silica particles occur as incrustation on the cell walls, e.g., on the walls of epidermal cells of many grasses, or as masses in the interior of cells, e.g., in sclerenchymatous cells of Cardamom seeds. Silica particles are insoluble in all acids except hydrofluoric acid.

The presence of silica in sections or powders of plant materials is not easily detected under the microscope. However, it may be examined by completely igniting the plant material and boiling the ash with dilute hydrochloric acid. The residue obtained after filtering the boiled mixture consists of the undissolved silica particles.

Alkaloids and Glycosides: These are important therapeutically active chemical substances, which remain in solution in the cell sap of many plant drugs. Their presence can only be detected by treating extracts of the drugs with specific colour reagents such as Dragendorff or Mayer’s reagent for alkaloids, and Borntrager’s reagent for anthraquinone glycosides.

Tannins: Tannins are phenolic substances, which occur in solution in the cell sap. Presence of tannins in cells can be detected by treating extracts or sections of the drug with a dilute solution of ferric chloride when a bluish-black or greenish colour is produced depending on the type of tannin present in the drug.

Volatile oils: Volatile oils are the odorous principles of many drugs, which occur as droplets in the cells. They are sparingly soluble in water, but soluble in alcohol. With osmic acid and Tincture of alkanna, they give similar reactions to those of fixed oils.

Resins: Resins occur as brown-coloured irregular masses or in combination with volatile oils ·and gums in some specialized cells of many plant drugs. Examples of such drugs include Cannabis, Jalap, Capsicum, Ginger and Podophyllum. Resins stain slowly with dilute Tincture of alkanna.

Gums and Mucilage: These are polysaccharide complexes present or formed in cells of many plant parts, such as leaves, fruits, barks and woods. Mucilage occurs in the leaves of Senna and Buchu and seeds of Linseed and Mustard and gums are produced in the woods of Acacia, Tragacanth and Sterculia when they are naturally or artificially injured. Solutions of Ruthenium red, Chlor-zinc-iodine and Methylene blue solutions stain gums and mucilage.