Volatile oils are natural odorous substances obtained from plants. They are responsible for the aromatic essence or odour or fragrance of various organs of some plants,-Volatile oils are present in the oil glands and ducts of plant tissues, particularly those of flower petals, leaves, fruits and seeds, and in the glandular trichomes of many plants. These oils evaporate freely on exposure to air when freshly obtained. That is why they also called ethereal oils. Since these oils represent the essence of the plants and the plant parts, which contain them and are very essential for attracting .insects and other animals to help in their reproductive process, they are also called essential oils. Volatile oils do not leave permanent grease spot on paper.

Volatile oils vary widely in chemical composition. Hydrocarbons, alcohols, aldehydes, ketones, ethers, oxides, esters and many other kinds of organic compounds may be found in volatile oils. They are usually extracted from the plants by steam distillation. They may also be extracted by organic solvents like ether and alcohol or by expression.

Examples of some volatile oils are described below in the form of Monographs.

Clove oil is the volatile oil obtained by steam distillation from the dried flower-buds of Eugenia caryophyllus (Spreng.) Sprague, a small to medium-sized evergreen tree of the family Myrtaceae.

Cloves are exported from Zanzibar Pemba Penang and Madagascar. Clove plants are cultivated in Sri Lanka and India for commercial production of Clove.

Clove oil is a colourless or pale yellow, thin, oily liquid when freshly prepared. It becomes darker and thicker on age or on exposure to air. It possesses a strong, fragrant, spicy odour and a pungent aromatic taste. It is miscible with alcohol, ether and glacial acetic acid. Its specific gravity is greater than one. 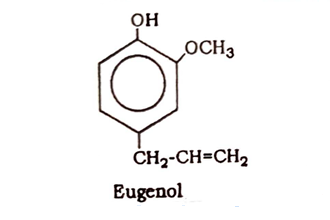 Clove oil is used in dental surgery as an analgesic and toothache remedy. Clove oil also possesses antiseptic and carminative properties. It is used in pharmaceutical preparations as a flavouring agent. It is used as a common flavouring spice in cooking meat in Asian countries.