External characters refer to the various modifications, artifacts, ramifications and outgrowths that take place on the outer surface of various plant organs. The outer surface of all young plant organs, as mentioned before, is made up of a continuous single layer of closely fitted parenchymatous cells called the epidermis. The epidermis assumes different structures and performs different functions depending on its age and place of occurrence on the plant body. It is also named differently as it matures and occurs on different organs.

The epidermis of the leaves is continuous with that of the stem and is derived from the dermatogen of the apical meristem. Usually, it consists of a single layer of compact cells with occasional stomatal openings, but become multi-layered ion some special cases like the leaves of Piper betle or Ficus elastica.

The anticlinal and periclinal walls of the epidermal cells and thickenings on them vary from plant to plant. For example, straight-walled cells are present. in Senna and Coca leaves; wavy-walled cells in Stramonium, Belladonna, and Hyoscyamus; beaded walls In Digitalis lutea and Lobelia inflata.

The outer walls of epidermal cells are often covered with a waterproof transparent layer of cutting, which is called the cuticle. The cutide is a protective layer and is usually very thin, but with excess deposition of pro-cutin in may produce ridges and become somewhat striated. Cuticle occurs mainly in plants, which conserve water or produce volatile oil. Thick cuticle occurs in Aloe leaf and striated cuticles in Belladonna, Digitalis, and Jaborandi.

Stomata arc important epidermal structures of great diagnostic value in the examination of leaf drugs. They are formed by the structural modification of epidermal cells. A stoma consists of two similar cells, called the guard cells, placed with their long axes parallel to each other and having a small intercellular space called the stomatal pore. Through this pore gaseous exchange takes place between the atmosphere and the interior of the leaf. The cells immediately around the stomata are called the subsidiary cells, which may or may not be similar to the other epidermal cells. The type, occurrence and distribution of the stomata in the leaves of different plants vary from plant to plant. They are often characteristic of various leaves and offer important diagnostic characters for the identification of many leaf drugs.

Usually stomata occur both on the upper and lower surfaces of leaves, but their distribution on the two surfaces vary greatly. They may be entirely confined to the lower epidermis as in Ficus, Buchu, Coca and Jaborandi leaves. The floating leaves of aquatic j plants have stomata on their upper epidermis only. Sometimes they are evenly distributed on both surfaces but most commonly ‘ they are more numerous on the lower surface. The number of stomata per square mm of epidermis (stomatal number) and the ratio of stomatal number between the upper and lower epidermis sometimes offer very useful parameters in differentiating between closely related species.

The type of stomata also varies from plant to plant. Based on the form and arrangement of the subsidiary cells, the following five types of stomata may be recognized:

Cystoliths of calcium carbonate occurs in the epidermal cells of the members of Cannabmaccae spherocrystals of diosmin in Buchu epidermis of senna and Buchu leaves. 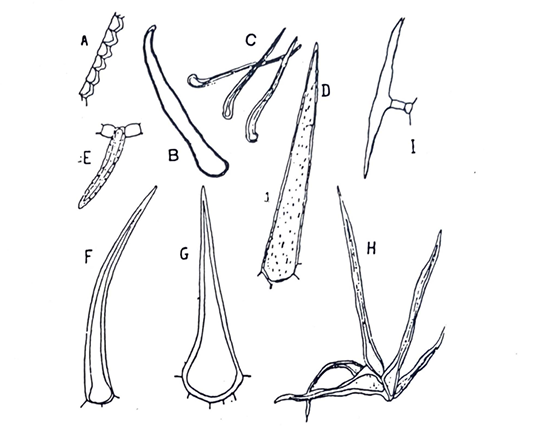 Epidermal cells of some plants sometimes extend outwards as dome-shaped or conical projections which are termed as papillae, the epidermis being called papillose. Papillae occur most frequently on the under surface of the leaves of Coca and Cassia obovata.

Trichomes are elongated tubular outgrowths on the epidermal cells of. most leaves, many herbaceous stem, flower, fruit, and seed. They are also called epidermal hairs. The occurrence and forms or the trichomes are very valuable characters for the identification of leaf drugs and detection of adulterants in them. They may be absent from many important Jcaf drugs like Coca, Hemlock and Convallaria, or they may be of rare occurrence as in Buchu and Henna, but many leaves possess them ii~ more or less abundance. Three types of trichomes or hairs are generally recognized;

And other special types. Anyone type or more than one type of trichomes may occur on the same plant.

Hydathodes are special structures formed by the modification of some epidermal cells. Some of them resemble the stomata in structure but do not contain chloroplasts and others resemble the glandular trichomes which are found on the leaves of Piper betle. Their main function is absorption or secretion of water.

There are a large number of leaves, which constitute pharmaceutically useful drugs and commercially important commodities. Some of the important. leaf drugs arc described below in the form of Monographs as reprcscnlat.ivc examples for the students so that they can also describe other leaf drugs in the same way.