There are a number of commercial varieties of Fennel, which include the following:

Commercial varieties of Fennel occur partly as whole cremocarps and partly as isolated mericarps. The size of the cremocarps ranges from 3 to 10 mm in length and up to 4 mm in breadth. They are straight or slightly curved and oval oblong in shape, tapering slightly towards the base and apex, usually crowned with a short curved bifid stylopod at the apex and a tail like pedicel at the base. Green or yellowish brown in colour and tough in texture. Each mericarp (one half of the cremocarp) has five pale yellowish-brown, straight ridges, and contains one seed. Odour and taste of the fruits are aromatic and sweet respectively. 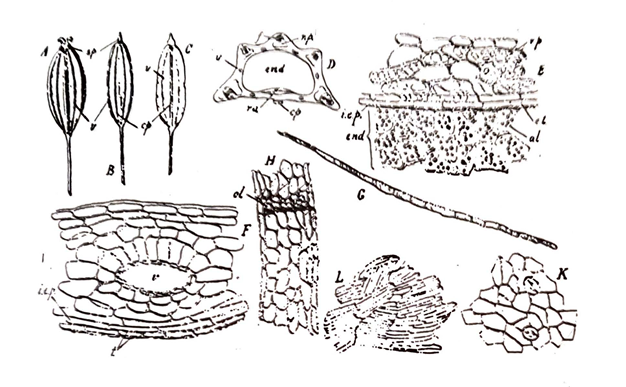 Transverse section of a mericarp shows the presence of five vascular strands in the five ridges, a small secretory canal in each rib and six vittae. The rape lies on the inner side of the endosperm. The epidermis of the pericarp is composed of polygonal cells and contains occasional stomata. The major part of the mesocarp is made up of polyhedral parenchyma with cellulosic walls. But it contains much thickened and lignified parenchyma in the region of the vascular strands of the ribs. Xylem tissue of the vascular strands is composed of small spiral or annular vessels and tracheids. The vitae are very long and extend from the base of the fruit to its apex and taper towards the two ends. The endocarp consists of narrow elongated cells having a parquetry arrangement. The endospermic parenchymatous cells are. thick-walled and contain large number of small aleurone grams.

Fennel contains 1 to 4 percent of volatile oil, the chief constituent of which is a phenolic ether, anethole and the ketone, fenchone.

Fennel is commercially used as a spice and for the production of fennel is pharmaceutically used as an aromatic agent and as an effective Anethole Fenchone carminative drug in treatment and management of flatulence, dyspepsia, indigestion and other stomach troubles.