Classification is a means of systematic arrangement or separation of large varieties or quantities of things into smaller groups on the basis of some similar and dissimilar characters or features present in them.

Crude drugs are natural substances which are obtained from a large variety of natural sources. They consist of almost all parts of plants and animals, such as whole plants and herbs, their morphological or anatomical parts, saps, exudates, extracts, secretions and other constituents, whole animals, their anatomical parts, glands or other organs, extracts, secretions and other constituents of their organs. In order to conveniently study or handle all these natural crude drugs of varied descriptions, it is necessary to classify or arrange them into some smaller groups by using certain criteria.

Crude drugs are broadly divided into the following two main groups on the basis of their apparent morphological forms of occurrence and structural organisation of the plant or animal parts and their natural products, which constitute the crude drugs.

The Organised crude plant drugs are again further divided into the following two groups according  to position of the plant’s organs that constitute the crude drugs:

The c1ude drugs of the Overground organs are further divided into herb, leaf, flower, fruit, seed, bark and wood drugs and those of the Underground organs into root, rhizome, bulb and corm drugs on the basis of their morphological identity. The Unorganised drugs are also similarly divided into smaller groups on the basis of the nature of the natural product, such as juices, lattices, extracts, gums, resins and balsams, fats, oils, waxes, alkaloids, glycosides, etc.

This grouping or classification of the crude drugs is summarised below in a tabular form. 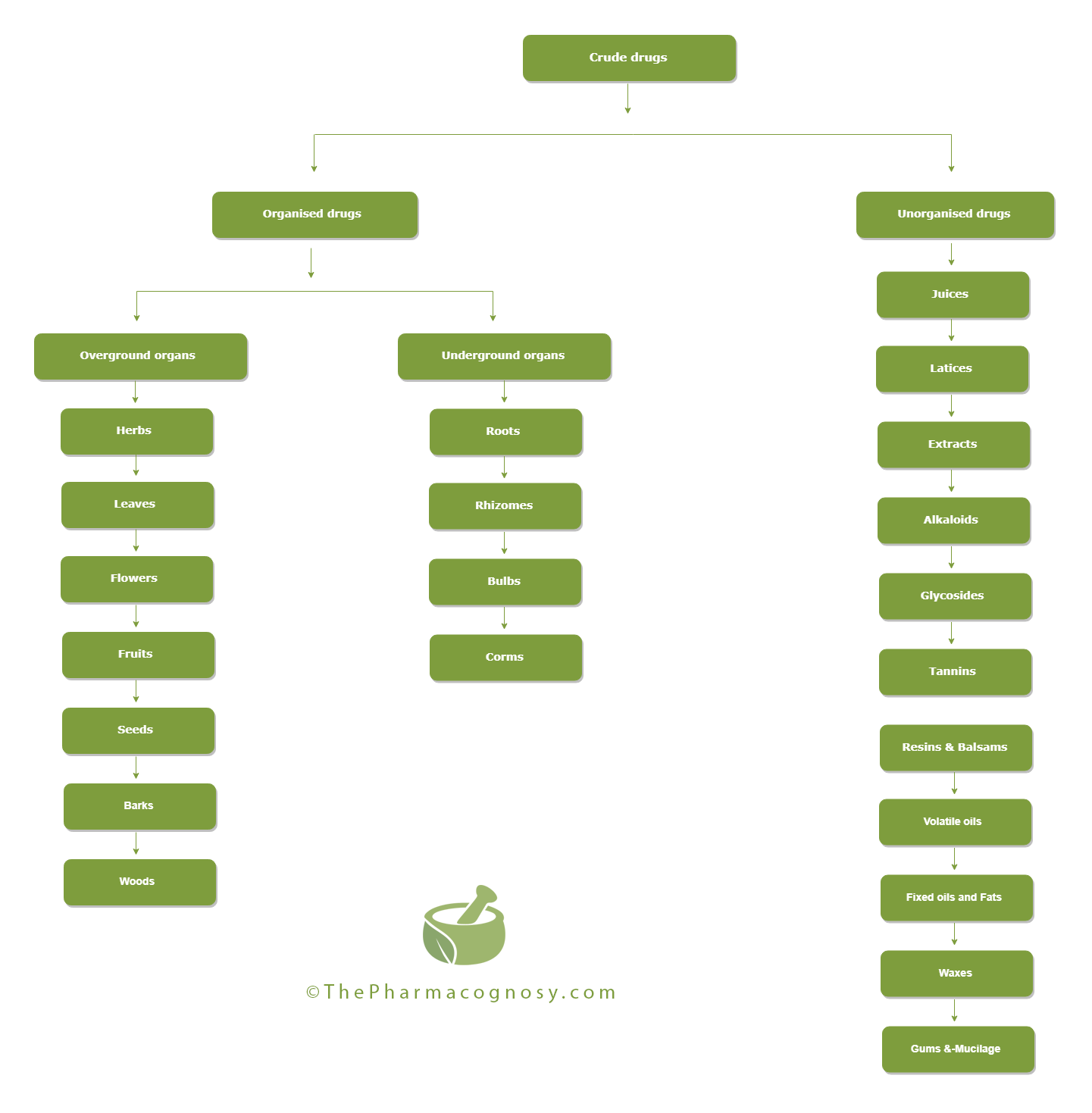 Classification of Crude drugs on the basis of structural organisation

For the convenience of documentation, study and storage all these smaller groups of crude drugs are again classified using either

Thus these systems of classification of crude drugs may be named accordingly as follows:

Each of these systems has certain advantages and disadvantages and the system to be used by an individual depends on his need and convenience.

In this system crude drugs are arranged in alphabetical order using their English or Latin names. The Pharmacopoeias and other official publications use this system. This is the simplest method of arranging crude drugs and is particularly suitable for classifying drugs having no connecting features of a scientific nature. Other than its simplicity and ease of use, this system does not give any useful information about the drugs and many unrelated drugs may be grouped together by using this system.

In this system crude drugs are arranged according to the natural groups (e.g. families) of their sources. Thus all the drugs obtained from plants of the family Umbelliferae are grouped together as umbelliferous drugs, those from the Solanaceae are grouped together as Solanaceous drugs and so on. This system of classification reflects the natural relationship or phylogeny of the sources, which are also in many instances found to contain similar chemical constituents. For example, volatile oils are the main constituents of the Umbelliferous fruit drugs, while tropane alkaloids are characteristic of the Solanaceous drugs.

In this system, the organised drugs are arranged according to the morphological similarities and dissimilarities of the various plant parts which constitute the drugs. Thus· all leaf drugs, irrespective of their chemical constituents and source, are grouped together. Similarly, barks of all parts are grouped in one group and so on. Unorganised drugs are grouped in this system as latices, extracts, gums, resins, oi.ls, fats and waxes, This system of classification is useful for a person who is expected to identify specific drugs and to detect adulterants in them. Similar morphological parts from different plants do not contain similar chemical constituents, e.g., bark of the Cinchona plant contains alkaloids, whereas that of Rhamnus purshiana contains glycosides and that of Cinnamon contains volatile oils. Since all of them are bark they are grouped together in this system. This system is therefore not suitable for use in storing drugs, but for study, this is a good system because of the structural similarity of the drugs.

This system is based on the pharmacological actions and therapeutic properties of the crude drugs. In this system, all the cathartic drugs are brought together regardless of their morphology, taxonomy or chemical, relationship. Thus, Podophyllum (a rhizome), Jalap (a · tuberous root), Cascara (a bark) and Castor oil (oil) are considered at the same time when this system is used. From the pharmacists’ point of view of studying drugs, this system apparently appears to be an ideal one as it furnishes the vital information about a drug. But the problems of contamination in storage and incompatibility in formulation are more likely if this system of classification is used without proper care.

Here the crude drugs are divided into groups according to their principal chemical constituents. Thus all alkaloid-containing drugs are put into one group regardless of other consideration. Similarly, all crude drugs containing glycosides are grouped together and so on Since the pharmacological actions and therapeutic uses of drugs depend on their chemical constituents, this system of classification appears to be an ideal one. Moreover, certain plant families exhibit definite types of chemical principles, e.g., tropane alkaloids characterize the Solanaceae family; volatile oils are common in the Umbelliferae family, while Pinaceae contains mainly oleoresins. Thus, from chemical point of view also the plants of these families are closely related. In that sense, this system is ideal not only for study but also for storage.