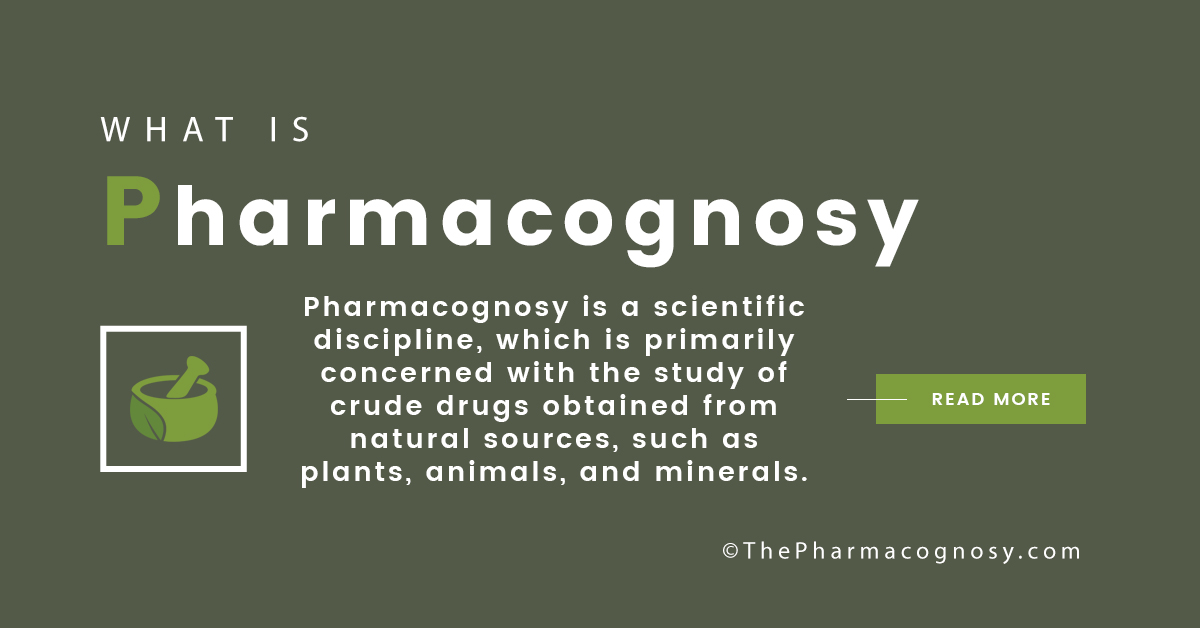 It may also be defined as an applied science which is concerned with acquiring knowledge of all aspects of crude drugs and other natural substances of pharmaceutical importance by the application of various scientific disciplines.

In other words, it may be said that Pharmacognosy is an important branch of pharmacy, which deals with the scientific study of the structural, physical, chemical, biochemical and sensory characters of crude drugs and related substances of plant, animal and mineral origin. It also includes a study of their history, distribution, cultivation, collection, identification, preparation, evaluation, preservation, use and commerce.

Pharmacognosy is mainly concerned with the study of naturally occurring substances having medicinal or therapeutic properties. Thus its main objective is to acquire knowledge of natural drugs from every point of view. But it is not entirely limited to the study of crude drugs alone. It also includes a study of their chemical constituents, which are the active principles of the drugs. Thus, both Stramonium and its chemical constituents, hyoscine and hyoscyamine; Rauwolfia root and its alkaloids, reserpine, and rescinnamine; paw-paw fruit and its enzyme-mixture, papain, thyroid gland and its extracted hormone, thyroxin, are equally important subject matters of pharmacognosy.

Other natural products of pharmaceutical importance, used in the formulation and preparation of pharmaceutical products, are studied as important subject matters of pharmacognosy. These substances, collectively called ‘pharmaceutic necessities’ or excipients, include the coloring and flavoring agents, emulsifying and suspending agents, diluents and disintegrates, sweeteners, binders, adhesives, solidifies, etc.

Other categories of substances, which are used as aids in medical and pharmaceutical practices, are also studied in pharmacognosy. Examples of such substances include fibers and surgical dressings, anesthetic aids, filtering agents, such as diatomite and asbestos, and bases and vehicles, such as agar, gelatin, wax, and fixed oils.

Beverages like tea and coffee are also studied in pharmacognosy because of their caffeine content that has good medical applications as an analgesic and stimulant.

Studies of some spices and condiments are included in the subject matters of Pharmacognosy, as they possess definite medicinal and pharmaceutical properties. Cinnamon bark, Cardamon fruit and various umbelliferous fruits (Fennel, Coriander, Cumin, Anise, etc.), Mustard seed, Clove flower-bud, and Ginger rhizome are some typical examples of such articles.

In addition, pharmacognosy includes studies of a variety of commercial and medicinal products such as pesticides, enzymes, vitamins, antibiotics, allergens, and allergenic extracts.